If you’re looking for the best picture quality projector that works best for you and your home theater. Then, a laser projector is different and good to go.

The most important thing about Laser projectors is that they are high-quality projectors. They have a sharper image quality with a wider range of available colors than a simple lamp-based model projector. Though it is a newer technology, it can be a little tricky while comparing two high-quality pieces of equipment like the Vava 4K vs Optoma P1 projector and to figure out which one has the best value.

A big TV and a good soundbar are not enough to make a great home theater room. It takes more than that. The conditions that are necessary to take into account are the things that make the surroundings of the projector’s operation. You need to consider:

In this article, we are going to compare and talk about two UHD laser projectors: VAVA 4K vs Optoma P1. So stay tuned to this article till the end to read my suggestion on Optoma CinemaX P1 vs VAVA 4K.

Although, both of the projector models VAVA 4K and Optoma P1 have an equally sharp picture quality with an impressively short throw ratio that provides the best smart TV experience in the living room. However, these two projectors are substantially competitive in some of their key features, specs, and price.

Between the two projectors, Optoma CinemaX P1 and VAVA 4K, one of them is better than another one. In our opinion, if you want to have an Ultra Short Throw projector then spending extra money for the Optoma CinemaX P1 projector is the stronger option and worth the investment. Read to know why.

So, before jumping into the full reviews of the VAVA 4K projector vs Optoma P1; let’s examine how these models differ and are comparable to each other.

Let’s take a look at the most important features and specs that are important to a projector’s operation and see which one of these two projectors VAVA 4K laser projector vs Optoma P1 is the right choice for your home theater.

The purpose of a projector is to turn a small image into a much larger one. This takes a certain amount of light to do so that is measured in lumens.

An ideal home theater projector brightness is around 2,500-3,500 lumens. However, the Laser projectors Optoma CinemaX P1 vs VAVA have a short-throw ratio because the light has less distance to reach the screen.

Contrast is a ratio difference between the whitest and the blackest part which is expressed like 1,000:1 or 2,000:1. According to the general rule of thumb, the higher the first number the better the contrast will be.

However, brighter isn’t a better option. Here comes another factor. In smaller and darker rooms, a bright lamp is less appealing to eyes that can cause eye strain. So, it requires moderate brightness with 3000 lumens produced by the Optoma CinemaX P1 projector.

While on the other hand, the large and well-lit spaces require a brighter lamp with 6,000 lumens produced by the VAVA 4K projector short throw.

Most of the speakers on home theatre projectors aren’t good enough to give you true sound and need an additional speaker for an immersive experience. However, the Harman Kardon soundbar built into the VAVA 4K projector is louder and gives better sound quality.

The major issue with the gaming projectors is the long delay between the input and the visual on the screen which is an important spec for gamers. While this doesn’t affect the viewing experience for movies.

An ideal input lag for gaming is <40ms. Anything >60ms is frustrating for players that demand quick reactions.

Although both of the laser projectors are not good gaming projectors. VAVA 4K projectors have an estimated latency of about 100 ms. While Optoma P1 projectors have 50-55ms latency that gives a sluggish gaming experience.

However, upon comparing VAVA 4K projector input lag with Otoma CinemaX p1 display lag; we got a better experience in the Optoma P1.

Great projectors are bound to produce accurate colors with adjustment capability. So that it can adjust for the room color and ambient light coming to the theatre room.

Do you want to hear noises of fans spinning and projector components whirling and cooling while watching a movie? Of course not.

But unfortunately, there is always an associated noise with all the projectors functioning. so the better is to go with the lower noise levels.

According to the VAVA 4K projector review, it has 32 dB. The Optoma CinemaX P1 reviews say it has 26 dB.

Resolution is the number of pixels that a projector sends to the screen.

Most of the projectors have 1080p resolutions. But the technology is shifting towards 4K-resolution which is almost 4x times the number of pixels. If you are looking for a 4K projector that is designed for large screens then both the VAVA 4K projector vs Optoma P1 have 4K Resolution (3840×2160) Pixel Shifting.

To use apps and for better streaming, you will need to use an external stick like Fire Stick and NVidia Shield TV Pro.

With Optoma CinemaX P1 Smart Fit App feature you can easily fit your image with geometry correction on the screen.

The other three smart features available in the Optoma P1 are:

Full Reviews and Specs of Vava 4K vs Optoma P1 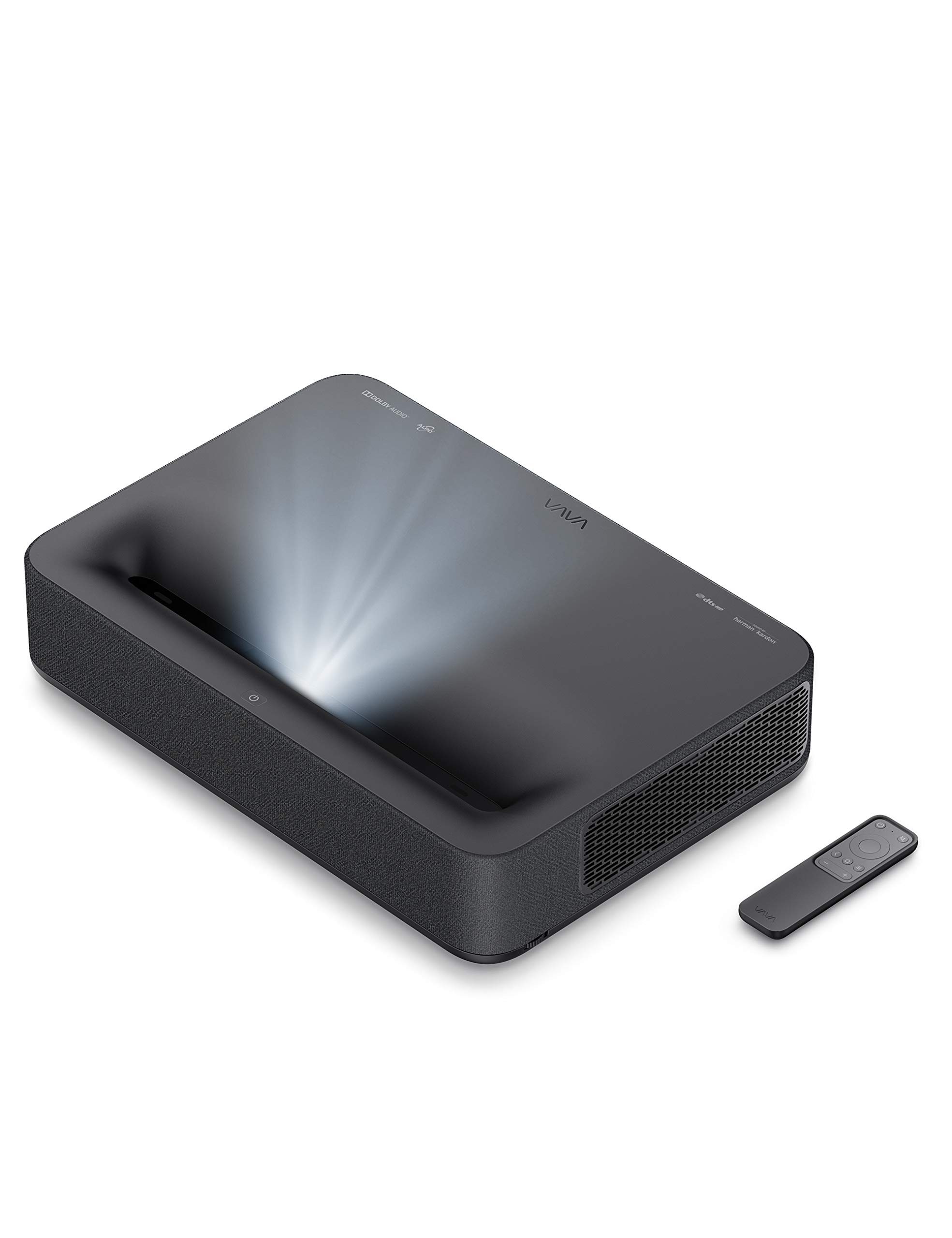 The Vava 4K Projector is a versatile big room laser-based projector due to the ultra-short throw ratio and the high brightness. The combination of features includes:

Another strength of the Vava 4K Laser Projector is the built-in audio quality with a 60-watt Harman Kardon soundbar. This is enough to be used without external speakers.

Also if you want to attach additional speakers you can easily connect with Bluetooth or any wired connection. 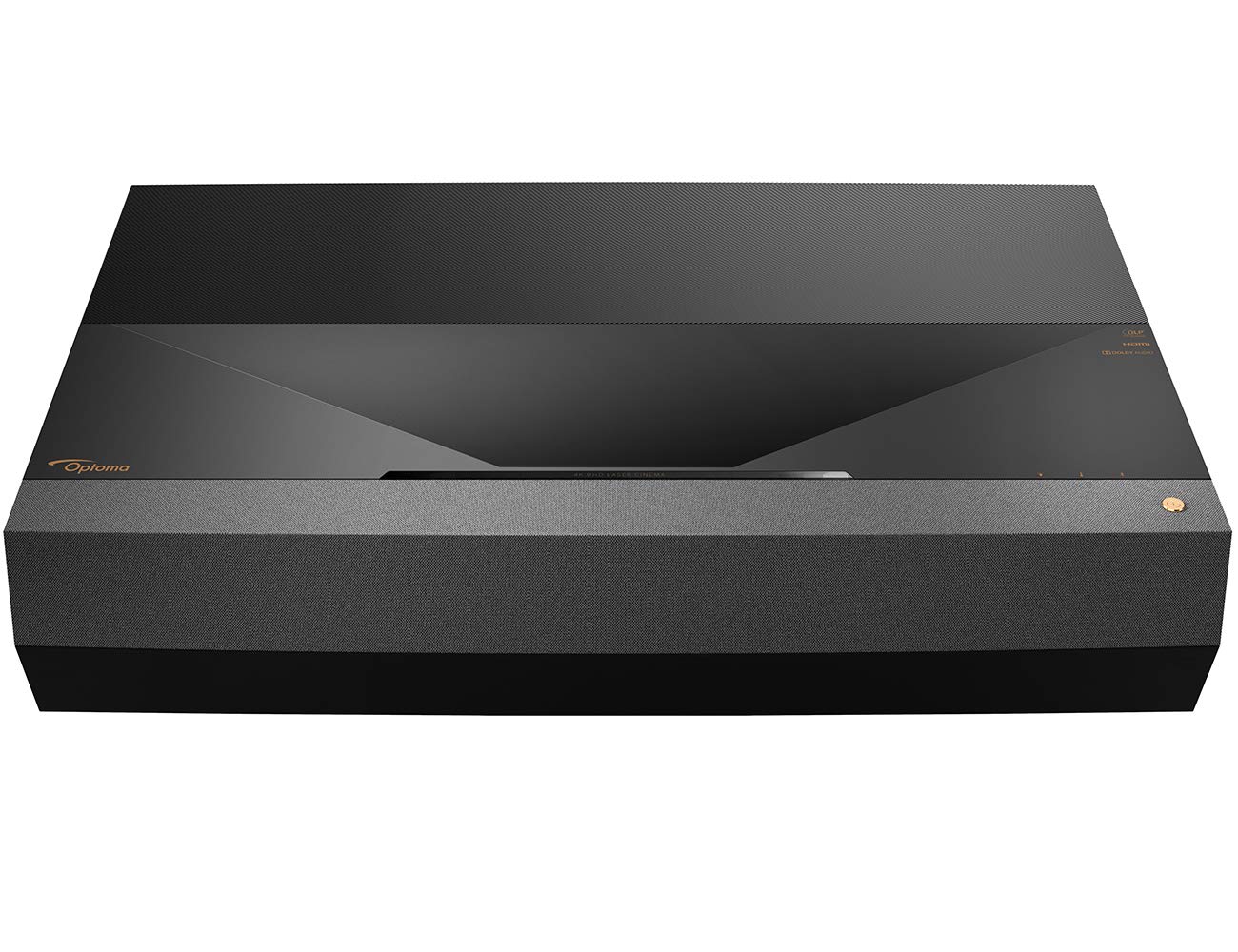 Both of the projector models, Optoma CinemaX P1 and the Vava 4K Projector are the best 4K ideal home theater projector combined with an impressive ultra-short throw ratio with laser technology. Whichever you buy, you’ll get sharp, clear, and superior picture quality on a large screen format. They both have a user-friendly interface with easy to set-up projector.

Either of these two will work great, we just feel that the Optoma CinemaX P1 is an investment that is worth the extra cost. The added smart features bonus set it apart from other home theater projectors.

The Optoma CinemaX P1 is still slow for fast gaming action and frustrating for multi-player games. However, it has less input lag than the VAVA 4K. So for gaming, it will be a better choice. Moreover, the smart built-in features of the Optoma CinemaX P1 software give it a slight edge.